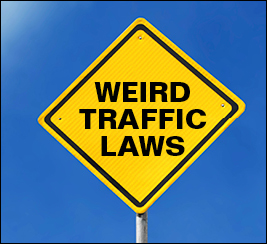 While most of us can cite a traffic law or two that just rubs us the wrong way, we understand that those laws were enacted with good intentions.
There are, however, a few that have clearly outlived their original purpose, didn’t make sense to begin with or are oddly specific. For example, it’s apparently illegal to read a comic book while driving in Oklahoma (no word if you’re OK cracking open a copy of War and Peace) or to frown at a police officer in New Jersey.
We’ve navigated the Internet and collected the following examples from the states where drivers do, fortunately, have the right to enjoy oil changes and other fast, friendly preventive maintenance services at their local Oil Can Henry’s. Enjoy!
CALIFORNIA:
It’s against the law for women to drive in a housecoat.
In Glendale, it’s against the law to jump out of a car traveling more than 65 MPH.
In Chico, you’re not allowed to plant rutabagas in the street.
COLORADO:
Denver prohibits driving a black car on Sunday. (While that sounds restrictive, Minneapolis traffic law goes even further by prohibiting the driving of a red car on Lake Street at any time.)
IDAHO:
Nonagenarians with an affinity for motorcycles may want to avoid Idaho Falls, where it’s illegal for anyone over the age of 88 to ride a motorcycle.
OREGON:
Drivers who are driving on a sidewalk (we thought for sure there would be a law against that) are required to yield to pedestrians.
It’s also against the law to use your vehicle to “prove your physical endurance”.
WASHINGTON:
In an admirable attempt to keep its citizenry safe, Washington state requires that motorists with criminal intentions stop at the city limits and telephone the chief of police prior to entering town.

Don’t worry, we didn’t forget about Arizona. Our research uncovered references to a law in the city of Glendale that prohibits driving vehicles in reverse, but we also found numerous posts disputing its existence. So, it appears lawmakers in the The Grand Canyon State are on the ball.
Reflecting on the  above list, our everyday traffic laws seem downright reasonable. So, get out there and enjoy the open road.
Safe motoring from all of us at Oil Can Henry’s!