Oil Can Henry’s – Soquel, CA:
The staff was courteous, informative and friendly and I love that you get to stay in your car for service.
I especially appreciate that they have a monitor next to the driver’s side window where you can watch the technician do the work and see for yourself that they’re getting the job done accurately and efficiently.
The old school outfits topped it off for me and made me smile, thus the 5 stars wasn’t a question for me.
~ Gina R.
Santa Cruz, CA


U.S. Route 26 is rich with history.
Portions of the highway retrace the original Oregon Trail as it travels from Ogallala, Nebraska, through Wyoming and Idaho on its way west to the Oregon coast.
The stretch of highway that runs from Downtown Portland to the coast was nicknamed Sunset Highway for the sunset emblem worn by the Portland-based 41st Infantry Division, which, according to the Oregon Historical Society, was among the  first U.S. troops to deploy in WWII after the attack on Pearl Harbor.
In the late 1970s, a large retail development named Tanasbourne was established along the highway, 11 miles west of downtown Portland. As detailed by Wikipedia, the name is “a hybrid of the Middle English term bourn and tenas from the Chinook jargon. The latter term translates as small and the former as creek, giving the term tanasbourne the meaning of small, pretty creeks.”
The Oil Can Henry’s – Tanasbourne service center opened its doors two decades ago, on May 13, 1996, to serve local drivers and employees of burgeoning nearby companies such as Intel and Nike.
The center has grown with the community and today is renowned for the quick, convenient and thorough service provided by its friendly, trained technicians.
Congratulations to the fantastic crew at Oil Can Henry’s in Tanasbourne, Oregon. Thanks for your hard work!
And a tip of our Gatsby to the five other centers celebrating May anniversaries:
* Corvallis, OR. 14 years (5/4/02)
* Florence, OR. 8 years (5/23/08)
* Newport, OR. 14 years (5/13/02)
* Sierra Vista, AZ. 27 years (5/18/89)
* Wenatchee, WA. 7 years (5/20/09)


Sumner, Washington is old-fashioned to the core — and it suits the charming community of 9,500 well.
“Full of old-fashioned friendliness, Sumner embodies all things Americana,” reads the state of Washington’s tourism website entry.  “Visit Main Street for shopping or stroll through Heritage Park near the historic downtown core. With the Daffodil Parade in spring, concerts in the gazebo in summer, scarecrows that come to life in fall and a bridge lighting with caroling and fireworks in winter, Sumner serves up every experience with an enthusiastic helping of old-fashioned fun.”
Sumner’s charming, old-fashioned Main Street has drawn national acclaim, too. John Larson of PBS once commented, “If you went looking for Main Street America, you’d be hard-pressed to find a prettier one than Sumner, Washington.”
This commitment to old-fashioned quality is undoubtedly why Oil Can Henry’s and Sumner are such a great fit.
We opened our Sumner service center six years ago (on February 13, 2010) and set about earning drivers’ trust with our commitment to providing old-fashioned quality they can trust. The hard work has paid off and we now happily greet repeat customers on a daily basis.
So, the next time you’re in Sumner — perhaps to enjoy a slice of rhubarb pie (after all, the area is renowned as the Rhubarb Capital of the World) — our team invites you to drop by Oil Can Henry’s and say, “Hi!”
Congratulations and an old-fashioned “Thank You” to the hard-working team of trained technicians at our Sumner center and the other five centers celebrating February anniversaries:

Keep up the great work!


Oil Can Henry’s – Redmond, OR:
Yes, it literally is as good as it gets. Great people. I trust them with my car.
Recently, I had a very minor problem and they made sure I got taken care of. Their customer service is indeed 5 Star.
It’s so refreshing to go to a business where they actually give a hoot about me and my car. I’m so tired of ho-hum customer service. In this day and age, it seems that customer service is getting worse in so many ways. But not at this place, they’re bucking the trend and giving FIVE STAR service all the way.
~ Calvin A.
Redmond, OR
via Yelp 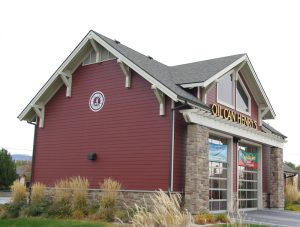 Eagle, Idaho, is soaring.
The beautiful community of 22,000 has grown steadily as people make the move  to enjoy its wonderful quality of life.
Close to seemingly endless outdoor recreation opportunities, Eagle is also just minutes from Boise’s thriving arts,  culture and food scenes.
Oil Can Henry’s is proud to be a member of the Eagle community, and to help local drivers ensure their vehicles run better and last longer.
When our  Eagle service center (3088 E. State Street) opened on January 28, 2009, residents welcomed us with open arms. They enjoy our stay-in-your-car service and appreciate that our quick, yet thorough service gets them back on the road — and back to enjoying all that Eagle and Boise offer — fast.
The Eagle service center is one of three Oil Can Henry’s locations in Idaho; we also serve drivers in Boise and Coeur d’Alene.
Congratulations to the team of hard working, trained technicians in Eagle and to the teams at the four other Oil Can Henry’s service centers celebrating January anniversaries: